Get your Free Guide "My Body is Mine Again"

Get your Free Guide "My Body is Mine Again"

Here's an explanation of the terms associated with female anatomy / female genitalia. 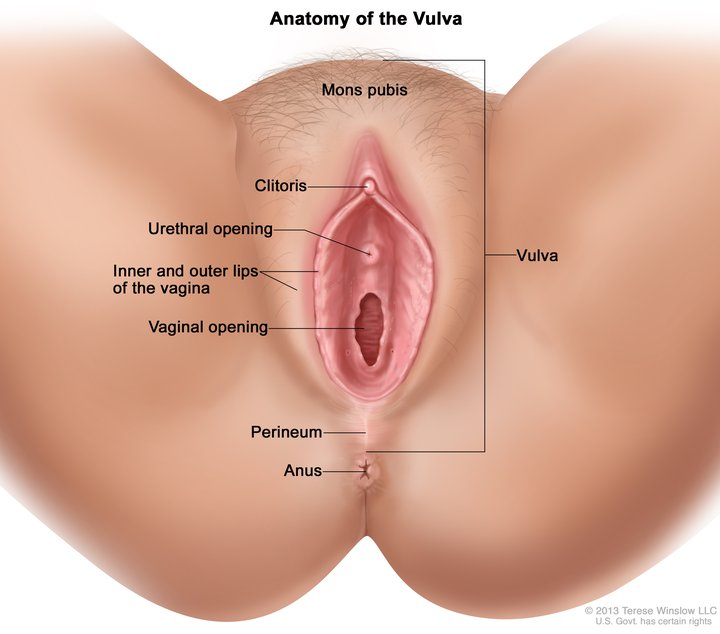 These are two rounded folds of fatty tissue that are covered with skin and extend downward and backward from the mons pubic. After repeated childbearing, the labia majora become less prominent, and in older women begin to shrivel. Their structure is 6 to 8 cm in length, 1-inch in width, and 1 to 2 cm in thickness, and is tapered at the lower extremities. (Labia majora reduction information)

Two flat reddish folds of tissue become visible when the labia majora are separated. It is a thick fold of tissue that is moist and reddish in appearance. There are no hair follicles in the labia minora, but there are many sebaceous follicles; a few sweat glands. (These structures are supplied with a variety of nerve endings and are very sensitive.) The labia minora vary greatly in size and shape. They usually are not visible in women who had no childbirth, whereas in women who have had children, it is common for labia minora to project beyond the labia majora. (Large or uneven labia minora can be problematic for some women, which is why they desire a labiaplasty.)

The clitoris is the equivalent of the penis in women in terms of nerve endings and sensation and is located above the vaginal opening and above the urethra. This erectile organ projects downward between the branched labia minora. Rarely the clitoris exceeds 1-inch in length, even in state of erection. The gland, which rarely exceeds l/8th of an inch in diameter, is richly supplied with nerve endings. The clitoris is the principal erogenous organ of women.

The vaginal opening varies considerably in size and shape. In virginal women, it is hidden by labia minora and covered with the hymen ring (read about hymenoplasty, reconstruction of the hymen). Some women become more irritated and fear a fungal infection of the enlarged labia, secondary to exposure of the extra tissue to the underwear or pantyhose. Many women prefer to have the shape of their labia more visually pleasant for themselves and their partner.

After childbirth and with aging, it's not usual structures to shift and/or weaken. Many women describe symptoms of feeling loose, having urinary incontinence and/or bowel function issues. Vaginal rejuvenation surgery or ThermiVA treatment (non-surgical for tightening the vagina) may be the solution.

Pelvic Relaxation Symptoms and Treatment
Childbirth, aging and other things can contribute to problems with vaginal structures. Read more about pelvic relaxation.
Vaginal Rejuvenation Reviews
Dr. Hailparn's patients provide reviews of their vaginal rejuvenation surgery experience.
Why Some Women Want Labiaplasty Surgery
Some women want labia reduction surgery for purely aesthetic reasons, while others have medical or functional issues that need to be addressed.
The O-Shot
The O-Shot not only improves orgasms, but its developer, Dr. Runels, reports that 85% of women experience resolution of stress urinary incontinence (SUI) symtpoms. Learn more.

The recommendations and information provided by this website are for educational purposes only. This website does not contain comprehensive coverage of the topics addressed, and is not a substitute for direct consultation with your healthcare provider. Always consult a physician regarding your specific condition. Final results of any medical procedure are dependent on many different factors and vary from patient to patient. Trademarks referred to are the property of their respective owners. Pictures used on this site are of models and not actual patients unless otherwise stated. ©2016 Cosmetic Gynecology Center of San Antonio.

I wanted to reach out and update you on how we're approaching COVID-19 at the Cosmetic Gynecology Center of San Antonio.

First and foremost, our hearts go out to anyone who's been impacted by the virus, either directly or indirectly. Our thoughts are especially with those who are sick, to whom we extend our heartfelt wishes for a full recovery.

At this time, my team and I have been fully vaccinated and we are taking all reasonable precautions to protect our patients. We are scheduling and conducting consults, along with in-office treatments and surgeries. We continue to check temperatures and ask that all patients or guests wear a mask while in our office.

As we go forward, we'll be sure to keep you updated and know that we always put your health first.